All articles tagged with "Choking"

Mistress Giselle was not going to let this loser get away with stealing her wine. She had warned him that whenever he felt like drinking her wine, all he needed to do was to ask. But he thought she would never know so he took a few bottles. She found out and she facesat on him and she strangled and choked him with her ass to teach him a lesson.

Aileen Taylor has big tits and a nice ass. She had used them to lure this guy to her house because she wanted something from him. But the guy did not want to talk about anything else other than her and sex. She devised a new strategy where she pretended to be kinky and she used her big its to choke him as she buried his face in her tits. She got what she wanted.

Mistress Michelle strangles slave for not listening to her

Mistress Michelle wanted her slave to learn that she would not always let him have his way. But he refused to accept that fact and she was left with little choice but to punish him and force him to realize that fact. She strangled him with her ass and her thighs to reinforce the point. She farted on him and when she was done with him, he was crying and he had surrendered. He also agreed with what she told him.

Mistresses choke guy for playing them

Mistress Janine and mistress Elaina discovered they were both dating the same guy. When they realized that, they did not fight each other. They laid a trap for him and when they caught him, he was beaten senseless. The mistresses went for his neck and they strangled him. He was in a lot of pain and he begged for mercy but they could not hear him and were busy inflicting pain on him.

Madame Marissa strangles slave to chase him away

Madame Marissa had had enough of her slave and she wanted him gone. She chose to chase him away using her strangling fetish. She loved to choke and to strangle. She loves it for pain as well as for pleasure. Now she was using it for pain and she compressed his throat till he could not breathe properly. She also nearly broke his windpipe. He did not wait to be chased away. He just left.

Lady Kathrin chokes guy for interfering with her business

Lady Kathrin was not going to let this loser get in the way of her business. She did not want anyone to come between her and her money. So she had to punish him and do it as cruelly as she was able to so that it would serve as an example to her and others. She strangled him using her hands as well as her knees. He never attempted to interfere with her again.

Mistress Robin chokes guy for being a nuisance

Mistress Robin loves to strangle. She enjoys choking guys and making her do what she says and what she wants. Today she enjoyed torturing and facesitting on this loser. He was a nuisance to her and others and she chose to take care of the situation by strangling him using her choke hold. She wrestled him and she defeated him. She humiliated him and he never showed up again out of shame. 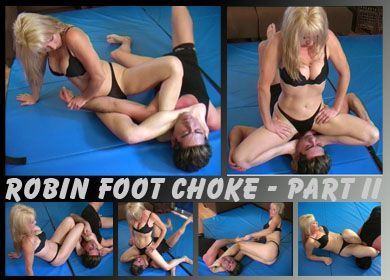 Mistress Anna chokes bitch for messing with her man

Mistress Anna did not like how this bitch was trying to make moves on her husband. She could not have it and had to teach the bitch a lesson. It had to be a lesson she would not forget in a hurry. She laid a trap for the bitch and when she caught her, she strangled her using her bare hands and made the girl pee on herself before letting her go.

Madame Marissa hates liars and her new slave was one. He did not know how much she hated lying and he learned the hard way. She choked him and humiliated him as punishment. She used her hands as well as her legs. She also used a rope to do it. Madame Marissa was not in a hurry to punish him and that made it all worse as she did more painful and cruel things to him.